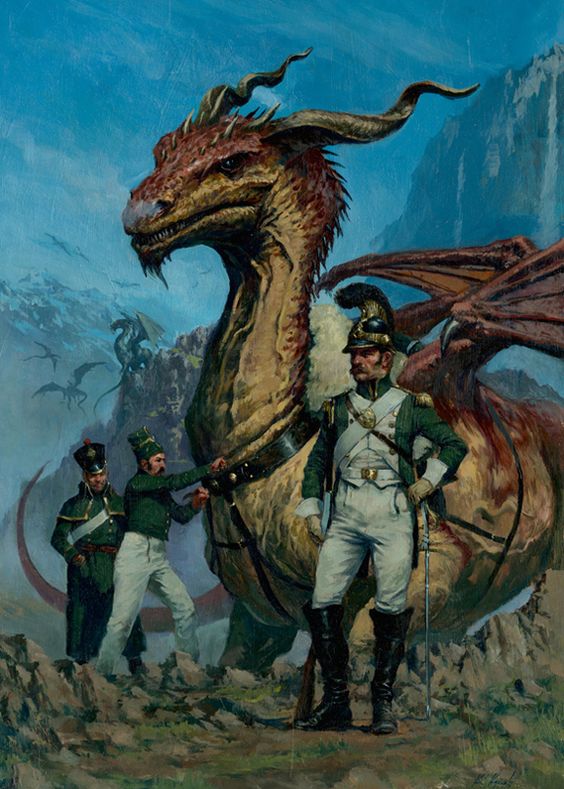 Run by the Aerial Command, the Corps is the branch of the Imperial military which engages in combat and other duties with dragons. Around the time the Dragon Plague was ravaging Britain, some two hundred dragons were a part of the corps, including dragons in breeding grounds.

The Aerial Corps uniform is much like the Imperial Navy uniform, except Aviators have a bottle-green coat with bars instead of epaulets, and they do not wear stockings and knee-breeches in battle. Aviators typically also wear a long oilskin overcoat, much like a duster along with goggles for flying.

One of the unique features of the Aerial Corps is that rank is determined not only by the holder’s ability, experience and record of service but also by whether or not they’ve harnessed a dragon and by that dragon’s status among other dragons. A 14-year-old who’s harnessed a Winchester or Greyling dragonet is a captain and as such outranks the first lieutenant of a heavyweight, even though the latter is almost certainly older and has more experience in the Corps.

On the other hand, precedence among captains is determined by the native hierarchies among their dragons, which depends on factors such as size, special abilities and experience. On the battlefield, dragons will instinctively recognize the authority of a Regal Copper with a 20-year-old captain much more readily than that of a Winchester handled by a veteran officer. There is no point arguing with the dragons, so it is the humans who must adapt.

While in the Imperial Navy officers were generally drawn from the upper classes, service in the Aerial Corps was considered less prestigious, and most of the Corps was drawn from the ranks of the shabby-genteel. For example, John Granby was the third son of a coal-merchant. After his father’s decease, his family could no longer afford to keep him at home.

The difference in how society viewed the Corps in contrast to Navy arose in part from the constraints of the service in the Corps. In the Navy, an officer could rely on long furlongs between periods of service, whilst awaiting assignment or a while a ship underwent repairs. In the Corps, particularly after achieving a captaincy, the officers were much more tightly bonded to their assigned dragons and extended time away from them became a practical impossibility. Combined with the young ages at which the Corps began its training, often around seven years old, this led to officers of the Corps being slightly removed from society.

Moreover, the secrecy surrounding certain aspects of the service, the presence of female officers, and the idea that men were commanded under some circumstances by dragons rather than vice versa, as in the case of Training Master Celeritas, meant the separation from society was imposed from both sides.

Despite the stigma attached to service by society as a whole, certain families traditionally sent children to serve in the Corps as a matter of course. The Ferris’ of Haytham Abbey, headed by Lord Seymour, traditionally sent their third sons to serve in the Corps. The Rankin family used to maintain their own dragons before the Corps was brought under the jurisdiction of the Crown and still maintain a small covert in addition to providing the Corps with officers.

As dragons can be expected to outlive their captain, the Corps has to place serious effort into ensuring they are willing to continue service with the Corps following such a death. To this end it has been stated that the Corps breeds its captains, as much as its dragons. A bereaved dragon, being more likely to accept a new captain that through a familial relationship shares their sense of loss. In addition, as certain breeds of dragon will only accept female captains, the question of providing stable officer lines becomes even more important.

In the western world, dragons are divided into three major weight classes; Lightweight (which is in turn divided into Courier and Light-Combat), Middleweight, and Heavyweight. It should be noted, however, that weight is not always a clear indication of size. For example, the Celestial dragon Temeraire is said to weigh around 18 Tonnes, but drawings of the breed depict him much larger than other breeds of similar weight. However, he is said to be leaner than Maximus, a Regal Copper, so presumably the Celestial breed is lean by nature. Another thing to note is that some breeds of dragon can only reach certain heights, hence different courier breeds being used for different distances.

Currently, the specifications for the groups are based off confirmed sizes of specific dragon breeds.

Note on Crew Sizes: When not in combat, a dragon can carry up to 4 times the maximum crew size while still maintaining flight. The largest Heavyweights can easily ferry 200 adult humans at a time when used strictly as transports.