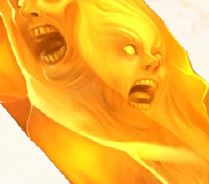 This mask, apparently carved from a heavily faceted yellow-gold gemstone resembles a feminine human face. The exterior surface of the mask is solid, without holes for eyes, nose, or mouth. Close examination of the mask reveals a swirling mass of tortured faces just under the masks crystalline surface. It radiates an overwhelming aura of necromantic and transmutation magic.

The Eye of Serenity has neither strings, nor a clasp, nor holes for such, requiring that the user dedicate at least one hand to hold the mask up to their face (though it might be possible to hold it on with a band tied around the outside). Because it has no eye holes, anyone in possession of the mask is effectively blinded during any round in which he uses the mask’s powers. Since the mask does not fit closely over the face, it does not impede breathing or speech, despite the lack of mouth or nose holes.

Whenever the mask is not held or worn by a living creature it warps the fabric of time around itself, affecting all living creatures within a 60-ft. radius as per the Slow spell. No saving throw is allowed against this time-warping effect, though spell resistance applies. Constructs, the undead, and other non-living creatures are not subject to this slowing effect. In addition, each round, on Initiative count 1, the mask unleashes a brilliant flash of yellow-gold light, equivalent to a Flare Burst spell. Each time it emits this burst, one living creature within 60 feet (determined randomly) must make a Will save (DC 23) or gain 1d4 temporary negative levels (as per the Enervation spell). If a creature’s negative levels equal or exceed its Hit Dice, it is slain, and is immediately drawn into the mask as per the Soul Bind spell.

Likewise, any living creature touching the mask must immediately make a Will save (DC 23) or have their soul drawn into the mask, as above. Anyone who successfully touches the mask without having their soul bound becomes immune to any further slowing, enervation, and soul binding from the mask for 24 hours. As long as a living creature is in direct contact with the mask (either holding it or wearing it), the mask becomes unable to act on its own and the slow and enervation effects cease.

Anyone wearing the mask (either by holding it over their face or affixing it somehow) is constantly under the effects of a Haste spell. Any character (friend or foe) who begins their turn in direct contact with the wearer also gains the benefits of this haste effect, which lasts until the start of their next turn.

At will, as a standard action, the wearer of the Eye of Serenity can alter the flow of time around one living creature within 30 feet in a highly localized way. The affected creature immediately gains a full round worth of actions, acting immediately after the wearer’s initiative. This does not count against the target’s normal number of actions for the round, nor does it change his normal place in initiative.

Each time the mask’s time alteration power is used, there is a non-cumulative 5% chance that it attracts the attention of a Devil, Demon, Angel, Saint, or Petty God of power roughly equal to the wearer seeking to expand its portfolio. The attracted being moves at its best possible speed in the direction of the wearer with the sole intent of appropriating the mask.

Any divine being able to grant spells who gains possession of the mask will be able to grant power to one additional cleric, and adds the Time domain to its list of available domains granted. If given the mask willingly, the being is likely to be very grateful. 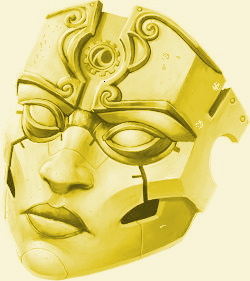